Archive for category: Knee and Leg

There are four bones joined at the knee, al- though no one bone touches all three of the others. The femur from above and the tibia from below articulate to form a joint that approximates a hinge. The patella, a sesamoid bone within the quadriceps tendon, articulates with the femur to create a joint that is similar to a pulley mechanism. The tibia articulates with the second leg bone, the fibula, in a joint that allows a small degree of rotation (Figs. 24 and 25). 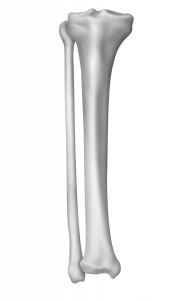 Figure 24
The bones of the leg: the tibia and fibula. The fibula does not contact the femur (as shown in Figure 25), but it is an important part of the ankle joint. 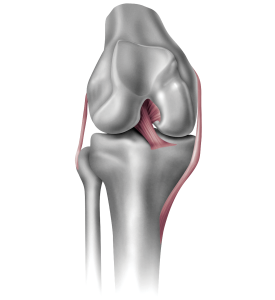 Figure 25
The collateral and cruciate ligaments of the knee. The cruciates reside within the notch between the femoral condyles: the posterior cruciate originates from the medial side and courses laterally toward its attachment on the tibia; the anterior cruciate originates on the lateral side and courses medially. These ligaments thus form a cross (hence the name “cruciate”) as they pass each other.

The ends of the femur and tibia are covered with articular cartilage, as is the surface of the patella. In between the condyles is a space called the intracondylar notch, which houses the cruciate ligaments. The femur does not articulate with the fibula. The distal ends of the femur, the condyles, can be thought of as two wheels that roll and glide along the relatively flat surface of the tibia. As the knee flexes, the femur rolls posteriorly. As the knee is straightened, the lateral plateau of the tibia reaches full extension before the medial side does; thus, at terminal extension the tibia rotates externally (with the medial plateau continuing to extend and the lateral plateau remaining motionless). These last few degrees of motion (“screw- home movement”) allow the knee to lock in full extension. As a result, the inability to fully extend the knee (a “flexion contracture”) can lead to an abnormal gait.

The function of the patella is to hold the quadriceps farther anterior to the central hinge of the knee, thus increasing the moment arm of extension. Knee extension can be considered a rotational motion around the center of the knee as seen on the lateral view. This torque can be increased by either pull- ing harder or increasing the distance between the line of pull and the axis of rotation. Increasing the distance between the line of pull of the quadriceps and the center of the knee is the goal of the patella. In fact, it is able to increase the torque by as much as 30%. The patella is consequently subject to high joint reactive forces—many times a person’s body weight, in fact.

The MCL is long and broad, extending from the femur to the tibial metaphysis. It prevents the loss of contact between the femur and tibia when the knee is hit from the outside. Since most people have a slight knock-knee (valgus) alignment, the MCL also prevents the joint from gapping during simple weight bearing. The LCL is much smaller (reflecting, perhaps, the reduced likelihood of being hit from the inside) and attaches to the fibula. It is the fibular attachments to the tibia, in turn, that complete the link, stabilizing the lateral side of the knee.

The cruciate ligaments are found be- tween the condyles in the intracondylar notch (Fig. 26). 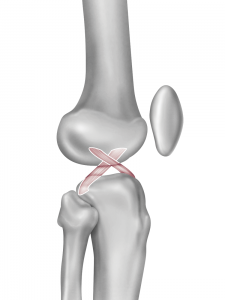 Figure 26
Sagittal view of a right knee with the femur ren- dered transparent to show the cruciates in the cen- ter of the knee.

The ACL resists anterior subluxation of the tibia, and the PCL resists posterior motion. The orientation of these ligaments is primarily vertical. This permits the knee to move through a wide arc of motion. In fact, you can think of the tibia as suspended from the femur by the cruciates and the hinge motion of the knee as the swinging that such suspension allows.

When the knee is flexed, the patella is stabilized by bone congruity: it sits firmly in the groove of the femoral trochlea. At full extension, there is no bony contact, and stability is achieved by the medial and lateral retinacula (ligaments that hold the patella to the femur) and the balanced tension of the muscles of the quadriceps. If the pull of the quadriceps is excessively lateral (as may be the case with a knock-knee deformity), the patella may be unstable. At the very least, this lateral pull can lead to imperfect track- ing between the articular surfaces, with greater contact on the lateral facet of the patella. This increased focal contact will in- crease pressure and, in turn, can lead to cartilage breakdown and pain.

The intra-articular space of the knee is lined with synovium, which produces lubricating and nourishing fluid. This space is bounded by a thin capsule that holds this fluid around the knee and prevents it from dissipating into the soft tissues. The extent of the pouch is at least a few inches superior to the patella, allowing a large space for injecting or aspirating the knee, if needed.

There are also two menisci (singular “meniscus”; Greek for “little moon”) in each knee, crescent-shaped cartilages that rest on the tibial plateaus (Fig. 27). 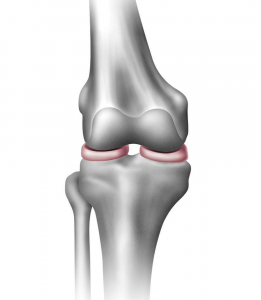 Figure 27
The medial and lateral menisci lie on the tibia and cushion the knee joint.

They are progressively thicker toward the periphery. Consequently, a sagittal or coronal slice (as seen in MRI, for example) looks like a wedge. The function of the meniscus is threefold: (1) it is a cushion that functions as a shock absorber; (2) it creates a greater contact area between the femur and tibia, allowing the force of weight bear- ing to be dissipated across a larger surface area; and (3) it helps stabilize the knee, much in the way a brick behind a back tire prevents a car from rolling while changing the front tire. Loss of the meniscus (as with an irreparable tear) may increase pressure in the knee along with a sense of instability.

Extension is powered by the quadriceps (innervated, primarily, by the L4 nerve root contribution to the femoral nerve) (Fig. 28). 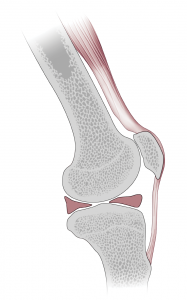 Figure 28
A profile view of the knee, illustrating how the patella increases the distance between the quad- riceps and the center of the knee. This lengthens the moment arm of extension, thus adding lever- age. The menisci are also shown.

The quadriceps, as the name implies, is composed of four muscles: three vastus muscles and the rectus femoris (Fig. 29).

Figure 29
The quadriceps muscles attach to the patella, which in turn attaches to the proximal tibia.

The hamstrings, which power flexion, also have four parts: the two heads of the biceps, which attach laterally on the fibula; and the medial group, the semitendinosus and the semimembranosus, which attach on the tibia. The gastrocnemius, which spans the knee posteriorly, attaches to the femur and also powers knee flexion. The muscles of the knee can also help stabilize the joint, especially when the cruciates are injured: the quadriceps has a slight anterior pull and the hamstrings and gastrocnemius pull posteriorly.

Although the biceps attaches to the fibular head and the semitendinosus attaches to the anterior tibia, in terms of flexion function, the hamstrings behave as if all were attached to the posterior tibia. Understand- ing the actual attachments of the tendons becomes important when examining patients whose tendons are inflamed or injured. One tendon crossing the knee, the iliotibial band, is not easily categorized. This is the tendon of the tensor fascia lata muscle, and it receives some fibers from the gluteus maximus. The band courses down the side of the leg and attaches on the anterolateral aspect of the tibia. When the knee is flexed beyond 30°, the band passes posterior to the axis of the knee and serves as a flexor. When the knee is flexed less than 30°, however, the band passes anterior to the axis and serves as an extensor.

The muscles of the leg are housed in four distinct fascial compartments: two posterior (one deep and one superficial), one lateral, and one anterior (Fig. 30). 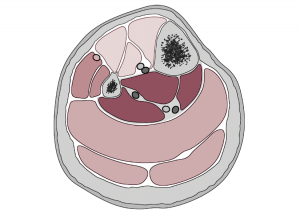 Figure 30
A cross-sectional view of the four compartments of the leg. Note that the lateral compartment holds the superficial peroneal nerve but no artery. The superficial posterior compartment, which contains the gastrocnemius and soleus muscles, has no major neurovascular structures.

The superficial posterior compartment of the leg contains the gastrocnemius, soleus, and plantaris muscles, all of which are innervated by branches of the tibial nerve. The gastrocnemius muscle is composed of medial and lateral heads that arise from the posterior distal femur (Fig. 31). 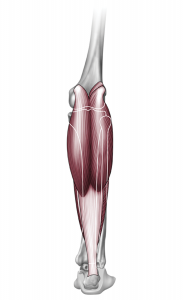 Its fibers cross the knee joint (and thus flex it) and insert into the superior portion of the Achilles tendon. The soleus muscle arises from the proximal tibia and fibula and inserts more distally into the Achilles tendon. These two muscles provide the vast majority of plantar flexion strength to the ankle. The plantaris is a small vestigial muscle whose strength contribution is minimal. 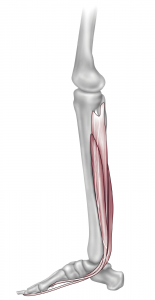 Figure 32
The flexor hallucis longus, flexor digitorum longus, and posterior tibialis. These muscles of the deep posterior compartment course behind the medial malleolus at the ankle.

Figure 33
The anterior tibialis, extensor hallucis longus, and extensor digitorum longus are muscles of the an- terior compartment and cross the ankle along its dorsal surface.

Innervated by the deep peroneal nerve, these muscles act as extensors of the ankle during the swing phase of gait. They arise from the anterior tibia and interosseous membrane of the leg and enter the ankle under the extensor retinaculum. Injuries to the peroneal nerve, therefore, result in a loss of active ankle dorsiflexion, a functional deficit known as a footdrop.

The lateral compartment of the leg contains the peroneus longus and peroneus brevis muscles (Fig. 34). 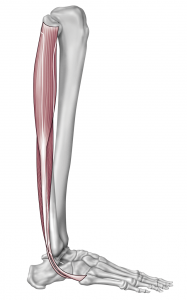 Figure 34
The peroneus longus and peroneus brevis muscles are muscles of the lateral compartment and cross the ankle behind the fibula.The brevis inserts on the fifth metatarsal but the longus courses under the foot to insert in the first metatarsal

These muscles are innervated by the superficial peroneal nerve and act to evert the ankle and protect against inversion sprains. They arise from the fibula, and their tendons cross the ankle directly posterior to the lateral malleolus.

Nerves and blood vessels are important components of the knee; however, for the most part, they are transient—on their way to per- form important tasks in the leg and foot. The nerves and blood vessels are located in back of the knee in the diamond-shaped popliteal fossa. The popliteal artery is an extension of the femoral artery, which changes its name as it dives posteriorly through the adductor canal. The popliteal artery gives off the genicular arteries, which supply the knee, and continues to the leg as the anterior and posterior tibial arteries. The posterior tibial artery splits and gives off the peroneal artery. The popliteal artery is at risk for damage during a knee dislocation because it is fairly well tethered within the fossa.

The nerves also pass through the popliteal fossa. In the thigh, the sciatic nerve splits into separate tibial and peroneal branches. These enter the fossa distinctly, with the peroneal laterally placed. The tibial nerve remains posterior in the calf throughout. The peroneal wraps around the fibular neck where it is subject to injury during fracture or dislocation. This nerve then splits into the deep peroneal nerve, which supplies the anterior muscles of the leg, and the superficial peroneal nerve, which supplies the muscles of the lateral compartment (the peroneus longus and brevis).