Synovitis is a nonspecific term that simply means inflammation of the synovial lining. Numerous conditions cause or are associated with synovitis. The pathologic characteristics of the synovitis vary depending on the condition.

This condition is the most commonly encountered type of monoarticular inflammatory arthritis. The hallmark on histologic examination of the synovium is many polymorphonuclear leukocytes (Fig. 2). 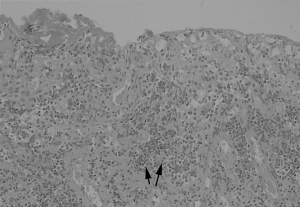 Many physicians employ a clinical-decision rule that holds that any effusion with a polymorphonuclear leukocyte concentration above 50,000/mm3 represents an infection until proven otherwise. The release of proteolytic enzymes by the inflammatory infiltrate will lead to rapid cartilage destruction if this condition is not identified early and treated.

Representative of the polyarticular noninfectious inflammatory arthritides, rheumatoid arthritis (RA) is a systemic disease in which synovitis is the essential component involved in symptom development and joint destruction (Fig. 3). 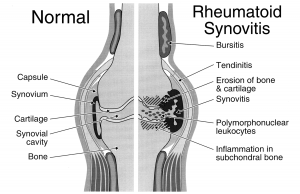 The etiology of RA is not entirely understood, but infectious, autoimmune, and hereditary causes are suspected. Over time, the deposition of antigenantibody complexes within the synovium causes an inflammatory reaction that perpetuates a vicious cycle that results in destruction of the joint. Although RA is a systemic disease, the principal symptoms affect the synovial joints in a symmetric fashion.2 The disease initially affects the small joints of the hand and wrist, followed by the larger joints as the disease progresses. Histologically, the early stages of RA are manifest as edema and chronic inflammation in the synovium. Hypertrophy and hyperplasia of the synovial cells produce thickening of the synovial membrane. The subsynovial connective tissue is expanded by a proliferation of capillaries and venules and a cellular infiltrate composed of many lymphocytes, plasma cells, and macrophages. The lymphocytes frequently form cuffs around the blood vessels or become arranged into follicles with central germinal centers (Fig. 4).

These changes cause the synovium to appear dense with a papillary architecture. Neutrophils are rarely seen within the synovium because they quickly exit the capillaries, traverse the subsynovium, and pass between the synoviocytes into the synovial fluid.

As RA progresses, subsynovial fibroblasts proliferate and deposit collagen fibers. Eventually, the synovial surface becomes focally coated by organizing fibrin. Some of the aggregates of fibrin float freely in the joint. The fibrin coat also makes the synovial surface sticky, allowing it to adhere to the periphery of the articular surface forming the pannus. The synovium continues to proliferate leading to villous fronds of inflamed tissue filling the joint. In the later stages of RA, there is complete destruction of the articular cartilage, creating the “burnt out” joint, which may be fused by either fibrous or bony ankylosis.

This condition (also called degenerative joint disease) is a common, slowly progressive noninflammatory disorder of the joints. Osteoarthritis (OA) is associated with aging, but no true etiology is known. Mechanicalwear, trauma, and genetics play a role in cartilage loss. Single or multiple joints may be affected. Unlike RA, in which the cartilage is destroyed by synovitis and proteolytic enzymes, OA appears to be limited (at least initially) to the cartilage. The subsequent synovitis is a response to articular cartilage injury and loss. The synovium develops a villous pattern with hyperplasia of the synovial membrane. The subsynovium typically lacks significant cell infiltrate, but a chronic inflammatory infiltrate may be seen in the synovium. As cartilage destruction occurs, small fragments will be shed into the synovial fluid, which may then be deposited in the synovium.