Neoplasms of the synovium are uncommon and can involve the synovial lining of joints, bursae, and tendons.

Most tumors of the synovium are benign and mimic the cells and tissue types that compose the articular and periarticular tissues. Hemangiomas and lipomas are examples of benign tumors that can affect the synovium and mimic the native cell types.4-6 In addition, pigmented villonodular synovitis and synovial chondromatosis are two uncommon yet benign diseases that are unique to the synovium. Pigmented villonodular synovitis is a proliferative process of the synovial membrane that most commonly affects the knee and tendon sheaths of the fingers. It is also found less commonly in the hip, ankle, toe, or wrist.7,8 The pathogenesis of PVNS remains unclear; inflammatory, metabolic, and neoplastic causes have been proposed. The onset of PVNS typically is insidious with slow progression of symptoms, including pain, warmth, swelling, stiffness, and sometimes a palpable mass. Men may be slightly more affected than women, with most cases occurring in the third or fourth decade of life. Plain radiographs can be normal or reveal a soft-tissue density mass with osseous erosions, cysts, and loss of joint space. PVNS has low-signal intensity on T1- and T2- weighted MRI scans because of hemosiderin deposition within the lesion. MRI scans show the lesion throughout the synovium, but the lesion may extend beyond the joint bursa.9 In the diffuse form of PVNS, most of the synovium is affected, yet some areas remain unaffected. This form of PVNS is characterized by many villi that coalesce and fuse into nodules that stud the synovial surface. These nodules range in size from less than a millimeter to several centimeters and are redbrown to yellow. The localized form of PVNS is characterized by a single, pedunculated or sessile red-brown or yellow nodule that is attached to the synovium. Microscopically, both forms have identical morphologic features. The subsynovium is expanded by a proliferation of medium-sized polyhedral cells with central nuclei and eosinophilic cytoplasm. Scattered throughout are hemosiderin-laden histiocytes, foamy macrophages, and multinucleated giant cells. The stroma is collagenous and frequently focally sclerotic. The lesion can also invade adjacent bones. Aspiration of the joint often reveals large effusions composed of a brownish, bloody fluid. Primary synovial chondromatosis is characterized by growth of hyaline cartilage nodules within the synovial lining of a joint, bursa, or tendon sheath.10,11 It is unclear whether these nodules are a result of a metaplastic or neoplastic process. Patients between the ages of 30 and 50 years are most commonly affected, with men affected twice as often as women. There is no known cause. The knee joint is most frequently involved, and it is usually unilateral in distribution. Common symptoms include pain, swelling, and mechanical symptoms such as locking or giving way. Physical examination may reveal an effusion, a palpable mass, tenderness, soft-tissue swelling, muscle atrophy, and crepitus. Once the cartilaginous nodules form, they may detach and become loose bodies.

These nodules differ from those that may develop secondary to trauma or degenerative joint disease. These conditions produce joint debris that sticks to the synovium, a process called secondary synovial chondromatosis. The nodules may be loose or attached to the synovial lining and range in size from a few millimeters to several centimeters. Primary and secondary forms of synovial chondromatosis are distinguished histologically. In the primary form of the disease, the nodules of cartilage form de novo. Histologic sections show nodules of hyaline cartilage, which are at most moderately cellular and contain plump chondrocytes (Fig. 5). 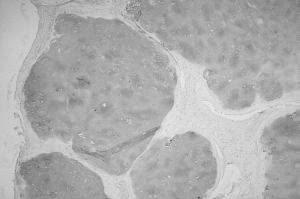 The chondrocytes may develop from resting fibroblasts, which undergo metaplasia and begin secreting chondroid matrix. The cartilage nodules may calcify or undergo enchondral ossification with the formation of mature lamellar bone.