Muscle contractions can be described as isotonic, isometric, or isokinetic. Isotonic contraction occurs, for example, when a biceps curl is performed with a free weight.

Concentric contraction occurs when the muscle is shortened as it contracts. Eccentric contraction occurs when tension is generated even though the muscle is elongated; the muscle power is used to decelerate the joint. Injuries occur more commonly with eccentric contractions.
Contraction of a muscle occurs as a result of the coordinated shortening of its component myofibers. For the contraction to occur, a highly organized intracellular apparatus consisting of long, slender myofibrils must function properly. Myofibrils are composed of repeating units called sarcomeres, which are the fundamental components of the con- tractile apparatus. Sarcomeres are made up of thick (myosin) and thin (actin) filaments in an intricate arrangement of bands and lines that allows these structures to slide past each other (Fig. 2).

Activation of the muscle fiber causes the myosin heads (globular regions of the myosin molecules) to bind to actin. This results in a change in the shape of the proteins, drawing the thin filament a short distance (approximately 10 nm) past the thick filament. Then the linkages between actin and myosin break and reform (requiring adenosine triphosphate [ATP], pulling the filaments past each other with a ratchet-like action.
Muscle contraction is stimulated by the motor nerve endings. A motor neuron in the spinal cord generates an electrical impulse, or action potential, that travels down its axon. The nerve enters the muscle and contacts an individual myofiber. This specialized communication point is called the motor end plate, or neuromuscular junction (Fig. 3). 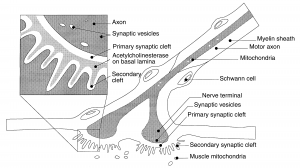 Here, the nerve forms a synapse with the muscle, a specialized site at which an electrical signal is transmitted chemically across a cleft to produce a similar electrical impulse on the other side of the gap.1 The presence of such gaps allows for the pharmacologic modification of what is essentially an electrical process.

As the axon approaches the muscle at the synapse, it loses its myelin sheath, and the entire terminal axon is covered by a Schwann cell, a specialized support cell that encases nerve fibers. The nerve terminal covers a region of the muscle where the membrane systems of the nerve and the muscle weave to maximize the area of contact between them. These folds are called synaptic folds, and the space between them, called the synaptic cleft, is 50 nm across.
The chemical mediator involved in neuromuscular synaptic transmission is acetylcholine, which is stored in the presynaptic axon in membrane-bound sacs called synaptic vesicles. The electrical impulse (action potential) produces an influx of extracellular calcium into the presynaptic terminal, which leads to fusion of the vesicle with the adjacent membrane and then the release of acetylcholine. The acetylcholine diffuses across the synaptic cleft and then binds to postsynaptic acetylcholine receptors, changing the membrane potential and generating an action potential in the muscle. Acetylcholine is deactivated by the enzyme acetylcholinesterase, which is also located in the synaptic cleft. The action potential reaches the interior of the muscle fiber through a membrane system that includes transverse tubules, directed perpendicularly to the axis of the fiber, and cisternae of the sarcoplasmic reticulum (SR), directed parallel to the axis of the fiber (Fig. 4). 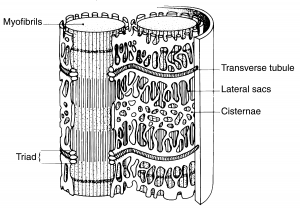 The SR is the system of membranes responsible for transmission of the electrical signal from one muscle cell to the next. An action potential moving over the surface of the fiber passes down the trans- verse tubules and causes Ca+2 release from the outer vesicles of the SR.
Each muscle fiber is contacted by a single nerve terminal. Collectively, a single motor axon and all the myofibers it contacts constitute a motor unit. The number of muscle fibers within a motor unit and the number of motor units within a given muscle vary considerably. The number of myofibers within a motor unit determines the precision with which the muscle can be used. A muscle under fine motor control may contain only 10 fibers per unit, whereas muscle under gross motor control may contain more than 1,000 fibers.2,3
The types of fibers within motor units also differ, providing an additional level of physiologic flexibility. At least three types of fibers have been identified in human muscle and are classified according to the different isoforms of myosin adenosinetriphosphatase (ATPase) they contain (Table 1). ATPase hydrolyzes ATP during muscle contraction, as myosin and actin slide over one another. The various types of ATPase work at different speeds, and thus the type of ATPase correlates closely with the intrinsic speed of mus- cle shortening. Essentially, these may be de- scribed as sustained slow fibers (type I), intermediate fibers (type IIA), and fast fati- gable fibers (type IIB).4 Slow fibers use aerobic metabolism and thus depend on ade- quate perfusion and oxygenation.