The intervertebral disk is the primary articulation between the vertebral bodies of two adjacent vertebrae.

The spine is composed of 23 such disks that unite the 24 vertebrae of the human spine to form four regions (cervical, thoracic, lumbar, and sacrum). The disks increase in height and diameter from the cervical to the lumbar spine (Fig. 10). 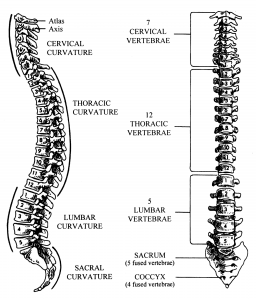 The anterior aspects of the cervical and lumbar disks are thicker than the posterior aspects and thus produce the normal lordosis seen in those regions. By contrast, the thoracic disks are of uniform height from anterior to posterior; normal thoracic kyphosis is caused by the shape of the thoracic vertebral body itself. The thoracic disks are thinner than in the other regions of the spine, a property that may restrict mobility of this region of the spine. The outer edges of the disks are attached to the vertebral bodies by small collagen fibers called Sharpey’s fibers.