The gross inspection of a ligament reveals band-like connective tissue, with little suggestion of its microscopic complexity. In fact,

skeletal ligaments are intricate amalgams of extracellular matrix proteins that are main- tained by a diverse population of cells. Liga- ments are typically composed of longitudi- nally oriented fascicles, 20 to 400 μm in diameter, that course between bony inser- tion sites. The fascicles consist of densely organized collagen fiber bundles that are ap- proximately 20 μm wide.

When viewed along the longitudinal axis of the fascicles, an organized, sinusoidal waveform can be appreciated. This pattern is referred to as the crimp. The longitudinal orientation of fibers and the crimp within them produce the unique structural proper- ties of ligament, namely, anisotropy and in- creased stiffness in response to increased load. The longitudinal orientation of the fascicles produces anisotropy: the ligament on the whole behaves like a rope because its elemental constituents are molecular ropes. The crimp is responsible for the nonlinear stiffness of ligament.1 As noted above, the stiffness of a ligament increases with increasing tension. This change in stiffness occurs because some of the fibrils within the crimp region are bent like a spring when the ligament is not under any tension. When tension is first applied, the crimp elongates (Fig. 2).

Schematic representation of the elongation of the medial collateral liga- ment as progressively stronger valgus stresses are applied to the knee. Initially, the wavy collagen fibers straighten, but as stronger forces are placed across the knee, the fibers within the ligament begin to rupture, resulting in ligament injury.

After the crimp is maximally stretched, how- ever, any additional displacement requires stretching of the individual collagen fibrils themselves.2

Ligament cells are typically oriented along the longitudinal axis of the tissue. These cells have been distinguished histologically on the basis of nuclear shape and the presence of a lacunar space. Three principal cell types have been described: fusiform, ovoid, and spher- oid. Fusiform cells are spindle-shaped and have been noted to be intimately related to the crimped collagen fibers. Ovoid and spheroid cells are typically found in columns, with amor- phous extracellular matrix in the pericellular space. The specific function of these types of cells is unknown.

The vascular supply of ligaments typical- ly originates in the blood vessels near the joint surfaces. Bundles of individual collagen fibrils within the ligament are surrounded by a vascularized layer of loose connective tissue known as the endoligament. The surface of the entire ligament is also covered with a vascularized layer called the epiligament. The vascularity of ligaments is not necessarily constant throughout their entire length. In the anterior cruciate ligament (ACL) of the knee, for ex- ample, there is greater vascularity at the fem- oral end, with vessels seen predominantly in the epiligament and endoligament. Few ves- sels are seen in the fibers themselves. The cells within the fibers depend primarily on diffu- sion of nutrients from the surrounding vascu- larized tissues.

Nerve fibers are typically located near the vessels, also predominantly in the epiligament. Four types of cells have been identified in the ligaments of the knee, specifically Ruffini re- ceptors, pacinian receptors, Golgi receptors, and free unmyelinated nerve endings. The neu- rosensory role of these receptors has been sup- ported by studies demonstrating somatosen- sory evoked potentials with mechanical stimulation of the human ACL,3 as well as changes in electromyographic function after disruption of the ligament.

Mechanoreceptors in ligament play an important role in the body’s proprioception by helping to provide the sense of where the body is in space. In an injured ligament, this function can be disrupted, causing disability that is seemingly out of proportion to the objective skeletal injury. When the ligament has healed but these nerve pathways have not yet been reestablished, an individual not staring directly at his or her foot may have a poor sense of where the foot is relative to the ground. This subtle clumsiness may be re- ported as instability: an individual will say that he or she simply does not “trust” the ankle even if an examiner cannot document objective in- stability. It may take a while for propriocep- tion to return—long after the ligament is healed—but it may be restored more quickly with physical therapy and rehabilitation. 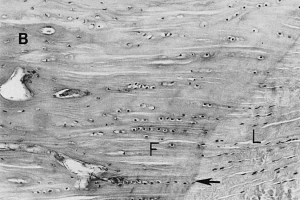 Figure 3
The four zones of the direct insertion of the medial collateral ligament into the femur. The deep fibers of the ligament (first zone) (L) pass through a well- defined area (arrow) combining a zone of uncalci- fied fibrocartilage and a zone of calcified fibrocarti- lage (second and third zones) (F) before inserting into the bone (fourth zone) (B).
(Reproduced with permission from Woo SLY, Gomez MA, Sites TJ, et al: The biomechanical and morphological changes in the medial collateral ligament of the rabbit after immobilization and remobilization. J Bone Joint Surg Am 1987;69:1200-1211.)

Collagen makes up 70% to 80% of the dry weight of ligaments. There are at least 15 distinct types of collagen, all of which are macromolecular triple helices composed of three amino acid alpha chains. All alpha chains are composed of repeating triplets of polypeptides. The most common sequence begins with the small amino acid glycine, followed typically by proline and hydroxy- proline. Hydroxylysine (with or without a sugar attached) is seen frequently as well. Because of the geometry of the proline mol- ecule itself, each alpha chain is wound into a left-handed helix. These in turn intermingle into one long, right-handed triple helix. This spiral configuration gives collagen the dis- tinct ability to resist tensile forces.

The type of collagen is defined by the molecular constituents of the amino acid chains as well as the presence of specific nonhelical domains. More than 90% of the collagen found in ligament is fibrillar type I collagen, with most of the remainder thought to be type III. Type II is found in articular cartilage and is more suited to resist com- pression. Fibrillar type I collagen is produced intracellularly and modified extracellularly by cleavage. Once modified extracellularly, these molecules then aggregate into mi- crofibrils. A microfibril is composed of a stag- gered array of adjacent collagen molecules, each offset by a quarter of its length. This allows many oppositely charged amino acids to align and bond, giving the fibril additional tensile strength (Fig. 4). 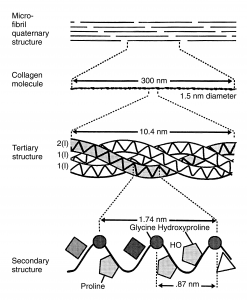 Figure 4
Schematic representation of the structural organization of collagen into the microfibril. The secondary structure is a single helix, and the tertiary structure is a triple helix.
(Reproduced from Woo SLY, An KN, Frank CB, et al: Anatomy, biology, and biomechanics of tendon and ligament, in Buckwalter JA, Einhorn TA, Simon SR (eds): Orthopaedic Basic Science: Biology and Biomechanics of the Musculoskeletal System, ed 2. Rosemont, IL, American Academy of Orthopaedic Surgeons, 2000, pp 581-616.)

Collagen is synthesized and degraded continuously, with a half-life of 300 to 500 days.

Consequently, after a period of years, an in- dividual essentially rebuilds his or her native ligaments. This turnover is akin to the remod- eling of bone; however, in contrast to the pro- cess in bone, the factors regulating collagen remodeling have yet to be elucidated.

Proteoglycans, such as chondroitin 4-sulfate and dermatan sulfate, make up less than 1% of the total dry weight of ligaments. Proteoglycan molecules are polar and thus hydrophilic, binding water within the ligament. Ligaments also contain elastin, fi- bronectin, and other glycoproteins. Up to 70% of the wet weight of ligaments is water, which is both structurally bound to collagen and freely associated with the interfibrillar gel.

Development and Aging
Scroll to top