Blog
You are here: Home / Blog / Musculoskeletal Medicine / Biology / Inflammation / Modification of the Mediators of Inflammation

Endogenous Inhibitors
To regulate the inflammatory response, numerous endogenous agents have been em- ployed. IL-4 and IL-10 inhibit cytokine production. PGE2 can either stimulate or inhibit inflammation indirectly. Several other agents are competitive inhibitors of inflammation.

Soluble TNF-α receptor proteins cleaved from the cell membrane, for example, can bind with cytokine in the extracellular fluid. This binding decreases the concentration of TNF-α available for attachment to the cell membrane receptor. Similarly, interleukin-1 receptor antagonist (IL-1ra) protein prevents binding of IL-1 to its receptor by competing for the binding site.

Tissue inhibitors of metalloproteinases are a class of proteins that block activation of the MMPs and prevent enzymatic degradation of the ECM. Transforming growth factor-β (TGF-β) is an agent that plays an important role in decreasing the destructive enzymes of the inflammatory cascade. It also promotes collagen formation, increases MMP inhibitors, and modulates IL-1. With chronic inflammatory disease, however, some or all of these inhibitory agents are produced in low concentrations or are them- selves inhibited. Augmenting their effective- ness offers a means by which medical intervention can decrease or slow the effects of chronic inflammation. 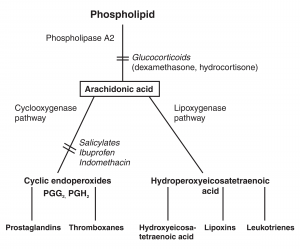 Figure 4
The arachidonic acid cascade and points of inhibition by NSAIDs (the cyclooxygenase pathway) and glucocorticoids (the conversion of phos- pholipid into arachidonic acid).

Currently, more than 20 NSAIDs are com- monly used to treat acute and chronic in- flammation; each varies in its biologic half- life and ability to inhibit the enzymes cyclooxygenase 1 (COX-1) and 2 (COX-2). COX-2 is thought to be an induced enzyme that catalyzes the production of prostaglan- dins in the inflammatory response. COX-1 is active (constitutive) in normal physiology and produces prostaglandins responsible for the homeostasis of many cells and tissues in the body. Therefore, the newer NSAIDs at- tempt to selectively inhibit COX-2 while pre- serving the activity of COX-1.

NSAIDs affect one arm of the arachidonic acid cascade: prostaglandin synthesis. Corticosteroids inhibit both prostaglandin synthesis and production of leukotrienes. They can be used locally, as an intra-articular injection, but they are also often administered orally for systemic management of chronic inflammatory diseases. Pharmaceutical steroids are synthetic analogs of cortisol, the body’s endogenous steroid. They mediate the inflammatory processes and inhibit the immune response through cellular actions at the transcriptional, translational, and post- translational levels. As the steroid binds to the glucocorticoid receptor on the cell membrane, human heat shock protein is released and the receptor complex moves to the cell nucleus. There it inhibits transcription of enzymes and cytokines involved in the inflammatory process.1 Long-term use of cortico- steroids can result in numerous adverse effects, including increased susceptibility to infection, osteoporosis, osteonecrosis, mood changes, depression, insomnia, cataracts, and glaucoma. Hypertension and a number of other endocrine and metabolic symptoms such as weight gain, glucose intolerance, and suppression of the hypothalamic-pituitary- adrenal axis are also seen with their long- term use. These endocrine effects can result in adrenal insufficiency and occasionally diabetes mellitus.

Chronic inflammation affects two principal areas in the joints—the synovium and the cartilage. In the early stages of disease, inflammation primarily affects the synovial lin- ing. As disease progresses, changes in cartilage occur, culminating in chondrocyte death and complete cartilage destruction by disintegration of its ECM.

Inflammation causes a large number of leukocytes to infiltrate the synovium, which dramatically increases the numbers of macrophages and B and T lymphocytes. The thickness of the synovial tissue increases as does that of the intimal layer, which may increase from one to four cells to several hundred.18 As the tissue volume increases, the synovial lining extends into the joint space and onto cartilaginous surfaces. To accommodate this increase in tissue volume, neovascularization occurs both below and within the thickened intimal layer. Because the synovium is the source of synovial fluid, an increase in volume with a concurrent in- crease in vascular permeability leads to in- creased fluid volume within the joint space (joint effusion).

The effects of inflammation on cartilage ap- pear to be secondary to the process itself and may even be independent of the initial inflammation. Several studies have demonstrated that in chronic arthritic diseases, cartilage degradation continues even when the inflammation has been suppressed.19 By decreasing proteoglycan synthesis by the chondrocytes and increasing synthesis and activation of the MMPs (collagenase, aggrecanase, and stromelysin), inflammation destroys the organization of the ECM in cartilage (Fig. 5). 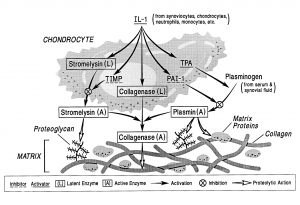 Formation of pannus on the cartilage surface establishes sites of synovial invasion into the ECM through en- zymatic degradation by the MMPs. With con- tinual release and activation of the MMPs, the cartilage completely disintegrates and the joint becomes unstable.