Vitamin D is a steroid hormone; as such, it binds to the nucleus of a cell and modifies gene expression and protein synthesis.

The function of vitamin D in mineral metabolism is to increase the serum concentration of calcium. The body obtains vitamin D directly from diet or through primary synthesis (Fig. 9). 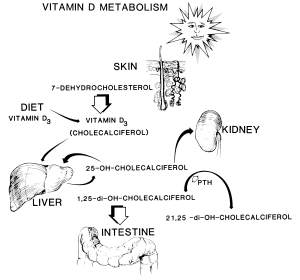 The endogenic synthesis of vitamin D begins in the skin when the skin is exposed to sunlight. Sunlight modifies 7-dehydrocholesterol to form the base (inactive) compound of vitamin D3 (cholecalciferol), which is then transported to the liver where it is hydroxylated. This hydroxylation occurs at what is referred to in chemistry nomenclature as position 25; thus, the molecule at this point in the process is called 25-OH cholecalciferol. 25-OH cholecalciferol is then transported to the kidneys, where it is hydroxylated again.

Like all steroid hormones, vitamin D arrives at these target organs via the bloodstream. Each organ has specific receptors for vitamin D.6 In the bone, vitamin D stimulates the release of calcium and phosphate. In the small intestine, vitamin D promotes the synthesis of proteins that transport dietary calcium into the circulation. In the kidney, it increases calcium resorption.