Whereas osteoblasts and osteocytes are responsible for the production of bone, osteoclasts break it down. Osteoclasts are large cells, derived from stem cells in the bone marrow that give rise to the monocytemacrophage cell line. Macrophages and osteoclasts, both formed by the fusion of monocyte precursors, are multinucleated.

When examined under light microscopy, osteoclasts are distinguished easily from other bone cells by their nuclear morphology (Fig. 5) and ruffled borders. 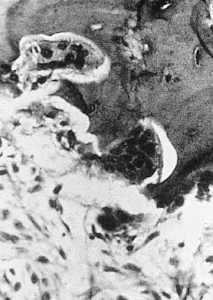 This ruffled border increases the surface area of the cell in contact with bone, and its presence indicates an “active” osteoclast. Osteoclasts reside in pits on the surface of bone called Howship’s lacunae. The stimulus for osteoclasts to begin bone resorption is provided by osteoblasts. In response to signals for bone resorption (such as PTH), osteoblasts secrete neutral proteases that expose the surface of the bone. Osteoclasts then work on this surface by attaching to the bone by means of receptors known as integrins. Their ruffled borders then secrete proteolytic enzymes and hydrogen ions (acidifying the local environment) that degrade the bone matrix. In this acidic environment, calcium hydroxyapatite crystals, which make up the mineral content of bone, become more soluble and are released into the circulation.