Bone is efficient. While forming and remodeling, mass is kept to a minimum. Bone is divided into two structural types: cortical (bark-like) and trabecular. Cortical bone is dense, with its collagen aligned in the direction of applied forces; the cortex of bone is found at the periphery and is responsible for skeletal homeostasis.

Trabecular bone is characterized by lattices of bone spicules, which are also aligned in the direction of load but with considerably more empty space than cortical bone. This type of bone, therefore, has a large surface-to-volume ratio and as such is best able to answer the demands of mineral homeostasis (as noted above, osteoclasts, which release mineral ions, require a surface on which to operate). Thus, trabecular bone is the area most likely affected by metabolic bone diseases. Trabecular bone also contributes to efficient mechanical support by orienting its spicules in the direction of load (Fig. 6). 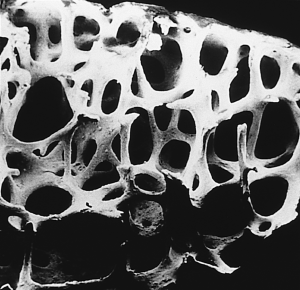 Figure 6 Trabecular bone is characterized by a threedimensional lattice of bony spicules with considerable space among them. (Reproduced with permission from Gibson JL: The mechanical behavior of cancellous bone. J Biomech 1985;18:317-328.)

Cortical bone, although dense, has its own microanatomy. The basic unit of cortical bone is the osteon. An osteon is a central canal housing a vascular channel surrounded by rings of lamellar bone (Fig. 7). 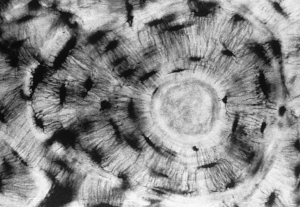 Osteons communicate with each other via side-to-side canals. Osteons allow even cortical bone to remodel by maintaining the tissue’s blood supply; they are likely to play a mechanical role as well, such as stopping the propagation of cracks within the cortex.