At the physis, chondrocytes proliferate, ma- ture, and secrete extracellular matrix, which eventually ossifies. The physis is polar: mov- ing away from the epiphysis and joint sur- face toward the metaphysis, there is increas- ing maturation of the cells. Just below the epiphysis is a zone of immature resting cells; just above the metaphysis, calcification takes place in the setting of programmed cell death (apoptosis) of the hypertrophic chondro- cytes. New bone formation thus occurs at the point farthest from the articular surface, at the junction between the physis and the metaphysis. This region is named the zone of provisional calcification.

The physis itself is divided into three ma- jor zones: the reserve zone, the proliferative zone, and the hypertrophic zone (Fig. 3). Each one of these zones has a distinct histology directly related to its function. The zones are ordered such that metabolic activity and mat- uration increases the farther the cells are lo- cated from the joint surface. 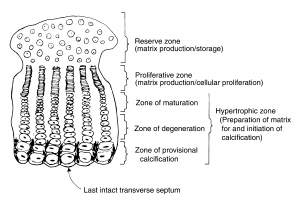 Closest to the surface (ie, nearest the epi- physis) is the reserve zone. The cells in this zone produce cartilaginous matrix, primarily in the form of type II collagen, which is used for eventual ossification into bone. These cells do not actively divide, nor are they very metabolically active; accordingly, they have the poorest blood supply.

Below the reserve zone, moving toward the metaphysis, is the proliferative zone. Within this zone, the cells are stacked in col- umns. These columns of cells synthesize pro- teoglycans, thereby contributing to the extra- cellular matrix. This region, characterized by synthesis and cell division, has the most ex- tensive blood supply within the growth plate. This blood supply provides nutrition, of course, but also allows hormonal signals to reach their targets in the growth plate effec- tively.

The third zone of the growth plate, the hypertrophic zone, lies closest to the calci- fied bone of the metaphysis. The cells in this zone are unusually large and plump; hence, the name “hypertrophic.” This zone of the growth plate is highly active metabolically, even though it has a poor blood supply. It therefore relies on anaerobic metabolism and uses stored glycogen as its source of energy. It is also the region that participates in min- eralization of the cartilage. Calcium is stored in the cells in the upper levels of the hyper- trophic zones. In the lower levels of the hy- pertrophic zone, these cells liberate their calcium in order to assist in matrix min- eralization.1

The actual process of matrix mineraliza- tion occurs at the interface between the hy- pertrophic zone and the metaphysis: the zone of provisional calcification. Within this area, vascular invasion allows osteoblasts to arrive and replace the calcified cartilage with bone. This bone is a primitive, less-organized form called woven bone. In time, this tissue will be replaced by mature lamellar bone via the process of bone remodeling. The distinction between woven and lamellar bone is one of material orientation: the fibers of woven bone are haphazard, whereas lamellar bone aligns the structure in the direction of load. Blood does not flow easily through the physis; the intramedullary blood supply does not reach the epiphysis or secondary centers of ossification. Accordingly, in children, whose growth plates are open, the main blood supply to the epiphysis is a direct epi- physeal artery. This artery loses its promi- nence once the growth plates close at skele- tal maturity.

Numerous circulating hormones affect growth plate activity. Thyroid hormone (thy- roxine), growth hormone, parathyroid hor- mone (PTH), calcitonin, and testosterone are among the hormones used to regulate growth plate physiology. These hormones can stim- ulate matrix synthesis, cell division, and cal- cification (and thus growth plate closure). The precise method and zone of action of these hormones are beyond the scope of this text. Even without entirely understanding their mechanisms of action, however, it is clear that abnormalities of these hormones can significantly affect the development of the human skeleton