The spine is composed of 24 vertebrae that are organized into four regions: cervical, thoracic, lumbar, and sacral (Fig. 41).

Figure 41
Sagittal view of the spine. Note the lordosis of the cervical and lumbar regions and kyphosis of the thoracic spine.

There are seven cervical vertebrae.

Two of these are distinctly shaped: C1, the atlas (which holds up the globe of the head) and C2, the axis.

C3 through C7 are more similar in shape to the remaining vertebrae below. The 12 thoracic vertebrae give off 12 pairs of ribs, each emanating from a single thoracic vertebral body. The first seven ribs articulate with the sternum. The eighth, ninth, and tenth ribs do not reach all the way around to the sternum directly but form a common cartilage bar that angles up toward the inferior border of the sternum. The eleventh and twelfth ribs are not attached to anything anteriorly; thus, they are called “floating ribs.” The five lum- bar vertebrae attach the thoracic region to the sacrum. The sacrum itself represents the fusion of five spinal elements into one bone.

When viewed in profile, the overall configuration of the spine places C1 directly above the sacrum; however, each region is curved. The cervical and lumbar regions demonstrate lordosis (arching back), where- as the thoracic spine is kyphotic (hunched). The three curves offset one another, which balances the spine overall. When viewed in the coronal (anteroposterior) plane, the spine should appear perfectly straight. Deviations to either the right or left represent scoliosis (the clinical entity termed “scoliosis” is a three-dimensional deformity, with a rotation- al component as well.)

The morphology of the vertebrae varies by region. For example, the body of a lumbar vertebra viewed from above is anterior (Fig. 42). 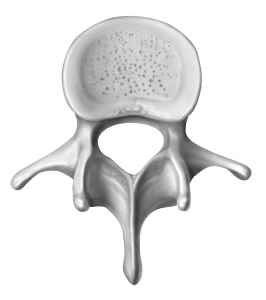 Figure 42
Axial view of a lumbar vertebral body. The space surrounded by the vertebral body, pedicles, and laminae houses the spinal cord and cauda equina

Projecting posteriorly off the body are left and right pedicles. From there, the trans- verse processes emanate laterally and the articular processes aim in the inferior and superior directions. Posterior to the transverse processes are the right and left laminae, which come together at the spinous process. The vertebrae of the lumbar region are stacked one on top of the other, with disks cushioning the bodies (Fig. 43). 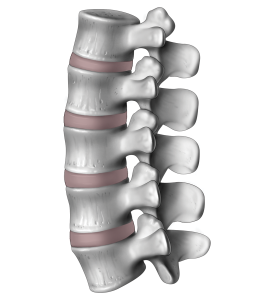 Figure 43
Lateral view of the lumbar spine showing the inter- vertebral disks, the neural foramina, and the pos- terior elements.

The standard cervical vertebrae, C3-C7, differ somewhat from the organization of vertebrae in the lumbar region. Unlike the vertebrae of the lumbar region, there are holes (foramina) in the transverse processes of cervical vertebrae that allow passage of the vertebral artery. In addition, the bodies are smaller and more square. The atlas (C1) is even more unusual in that it does not have a body; it is more like a bony ring supporting the skull. The axis below (C2) can be consid- ered to have taken this body, as it has a superior post-like process called the dens (also known as the odontoid) that projects into the ring of C1. The facet joints of the cervical spine are also more horizontally oriented than those of the lumbar spine, allowing slip- page with trauma more easily than in the caudal (distal) segments.

The main distinction between the thoracic vertebrae and those above and below is that the thoracic region attaches to the rib cage and is less mobile. Therefore, it is at the junction of the thoracic and the (more flexible) lumbar region that traumatic hyperflexion (as caused by a motor vehicle accident, for example) inflicts the most damage.

The sacrum, a triangular bone that is the result of the fusion of five sacral vertebrae, is the link between the spine and the lower limbs. The sacrum forms three important articulations. The first is an oblique junction with the last lumbar vertebra, L5. Congenital or developmental defects of this articulation may cause instability between L5 and S1 and anterior translation of L5 relative to S1 (spondylolisthesis). The sacrum also forms two lateral articulations with the iliac bones of the pelvis. The sacroiliac joints are stabilized by strong anterior and posterior ligaments. The sacrum is also a site of attachment of the gluteal and pelvic floor muscles. Four pairs of anterior and posterior (dorsal) foramina allow the sacral nerve roots to exit. A central longitudinal canal houses the sacral nerve roots. The coccyx is a highly variable vestigial remnant of a tail that lies at the end of the sacrum. It becomes mobile in pregnancy to al- low delivery and fuses to the sacrum in later adulthood. It also serves as a site of muscular and ligamentous attachments.

The front and back of the vertebral bodies are bound to those above and below by the anterior and posterior longitudinal ligaments, which prevent hyperextension and hyperflexion, respectively (Fig. 44). 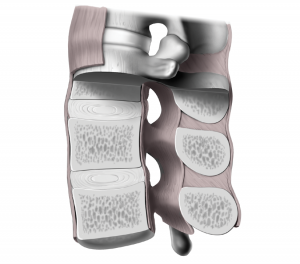 Figure 44
The ligaments of the lumbar spine. The anterior and posterior longitudinal ligaments lie on the ven- tral and dorsal surfaces of the body. The ligamen- tum flavum is adjacent to the laminae. The supras- pinous ligament connects the spinous process.

The laminae are connected by the ligamentum flavum. There is also a supraspinous ligament that connects the posterior-most aspects of the spinous processes.

There are specialized ligaments at the junction of the skull and the upper cervical spine. The dens of C2 is held within C1 by a transverse ligament. There are also vertically oriented fibers, which join the transverse ligament to form the cruciform ligament. This extends to the skull and helps stabilize the C1 articulation. The alar ligaments, right and left, connect the dens to the occiput. Accordingly, the upper cervical spine depends on ligaments for stability to a greater extent than the rest of the spine below; conditions that destroy connective tissue at synovial joints (such as rheumatoid arthritis) can lead to in- stability in this region.

In between the vertebral bodies lie the intravertebral disks, which make up approximately 25% of the height of the spine. The disks are essentially shock absorbers that are composed of a fibrous outer ring (the anulus fibrosus) around a soft inner core (the nucleus pulposus). The nucleus pulposus is made of a gel with a high concentration of proteoglycans; this component attracts and binds water and thereby provides cushioning. The anulus, a ring of about 90 sheets of collagen fibers laminated together, holds the nucleus in place. The most superficial fibers of the outer anulus blend with the anterior and posterior lon- gitudinal ligaments. The anulus is thicker on its anterior aspect, which may explain why the disk usually herniates posteriorly. There are also end plates above and below each disk composed of hyaline cartilage that separates the disk from the adjacent vertebral bodies.

Muscles around the spine are essential for postural stability and movement of the trunk. Muscles that attach directly to the bony processes of the spine and those that attach remotely, such as the abdominal wall musculature, can stabilize or move the spinal column. If the spinal column were stripped of its musculature, it would easily collapse. (The names of all of the paraspinal muscles and their attachments can be found in most anatomy texts.) The primary purpose of the muscles around the cervical spine is to position the head, while those attaching to the thoracic and lumbar regions control trunk position. One muscle worth knowing by name is the sternocleidomastoid, which connects the head to the trunk. A contracture of this muscle may lead to lateral head tilt and rotation (torticollis). Muscles that do not directly attach to the spine, such as the rectus abdominis, can still play an important role in stabilizing the spine. For this reason, abdominal strengthening is a key feature of physical therapy for back pain.

The spinal cord runs from the foramen mag- num to the L1 vertebral level, where it terminates in the conus medullaris. The cauda equina (a collection of nerve roots that has not yet exited the canal) continues distally within the dural sac. Nerve roots emanate from the spinal cord at every level (Fig. 45).

Within the cervical spine, roots are named by the body below their point of exit. Thus, the C7 root exits from the neural foramen above the body of C7. In the rest of the spine, the roots are named according to the body above. For example, the L5 root exits below the L5 vertebral body (Fig. 46). 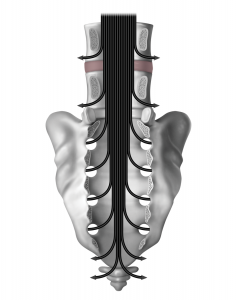 Figure 46
AP view of the nerve root exiting under the pedicles. Note that a herniated disk at L4-5 will contact the L5 nerve root unless it is a very lateral herniation, in which case it may compress the L4 nerve root.

The root that exits below C7 does not adhere to this nomenclature and is arbitrarily named C8, even though there is no C8 vertebral body.

Blood is supplied to the spinal column via a complex network of arteries and veins with countless variations and connections. In general, the arterial supply is provided by the cervical and vertebral arteries in the neck, the segmental branches of the aorta in the thoracic and lumbar regions, and the sacral arteries in the sacral region. The paraspinal soft tissues also receive their blood supply from branches of these vessels. The arterial blood supply for the pelvis and surrounding structures is provided by the iliac vessels and their branches. The venous drainage of the spine and pelvis roughly mirrors the arterial tree.