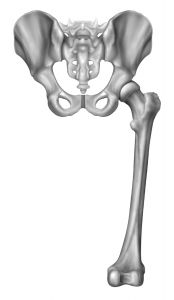 Figure 16
The bones of the hip: the pelvis and femur. Con- trast the inherent bony stability of this ball-and- socket joint with that of the shoulder.

The greater and lesser trochanters serve as attachment points for the hip abductors and flexors, respectively. The ridge between the trochanters is called the intertrochanteric region. The intertrochanteric region and the femoral neck are the two most common sites of hip fracture in older people. Femoral neck fractures are especially troubling, not only be- cause of their lower propensity to heal but also because the blood supply to the femoral head, which courses along the neck, is prone to disruption with such fractures. Disruption of the blood supply can cause ischemia, resulting in death of the femoral head.

The pelvis contains a right and left hemipelvis, each of which is composed of three bones: the ilium above the hip joint, the ischium behind and below the hip joint, and the pubis medial to the hip joint. These bones unite at the center of the acetabulum. The pubis and ischium also meet to surround the obturator foramen. Congruity between the femoral head and the acetabular socket de- pends on contact as the fetus develops; accordingly, children who have developmental or congenital dislocation of the hip may have malformed femoral heads and acetabuli.

Each of the three bones of the pelvis is typically palpable. The ischial tuberosity is the bony prominence on which we sit. The iliac crest is normally felt right below the beltline laterally. The junction of the right and left pubic bones, the symphysis pubis, is palpable inferior to the umbilicus. The entire proximal femur is deeply enveloped within a sleeve of muscles; thus, with the exception of the greater trochanter laterally, it is often not directly palpable.

The hip joint is a true ball-and-socket joint and therefore inherently stable. Nonetheless, it is supplemented with ligamentous attachments. Three anterior ligaments, one from each of the pelvic bones to the femur, comprise the hip capsule. In addition, a ligamentum teres attaches from the deepest base of the acetabulum to the femoral head directly. The pelvic bones themselves are attached to the sacrum by anterior and posterior sacroiliac ligaments. The right and left sides of the pelvis are attached anteriorly at the symphysis pubis by strong ligaments.

The acetabular socket is deepened by the labrum, a lip of cartilage similar to the meniscus of the knee and the labrum of the shoulder. It is a dense fibrocartilagenous ring that surrounds the rim of the acetabulum. Because the labrum increases the depth of the acetabulum, it enhances the stability of the hip joint.

Muscles of the hip are best considered in terms of functional groups, including the flexors, the extensors, the abductors, the adductors, and the external rotators. There are no true internal rotators of the hip joint. The strongest hip flexor is the iliopsoas, a muscle formed by the fusion of the iliacus and psoas muscles (Fig. 17). 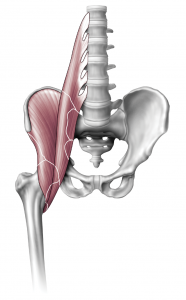 Figure 17
The iliopsoas muscle. The insertion on the lesser trochanter makes this a powerful flexor of the hip.

These muscles originate in the pelvis and unite to form a common tendon that inserts on the lesser trochanter. The rectus femoris, another flex- or, originates on the anterior-inferior iliac spine of the pelvis and courses down the femur, uniting with the vastus muscles to form the quadriceps tendon. The quadriceps ultimately inserts on the tibia via the patellar tendon. It thus extends the knee as well. The final flexor is the sartorius, the longest mus- cle in the body. It originates from the antero- superior iliac spine and inserts with the gra- cilis and semitendinosus on the anteromedial tibia to form the pes anserinus. Because it reaches the tibia behind the axis of the knee (in contrast to the rectus, which is located in front of the axis throughout), the sartorius is a flexor of the knee. The femoral nerve powers all of the hip flexors. 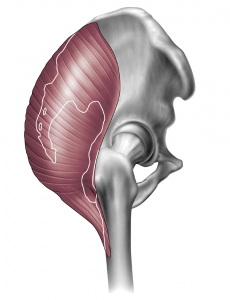 Figure 18
The gluteus maximus as seen on a profile view. This powerful muscle extends the hip joint.

It also has a common insertion with the tensor fascia lata muscle onto the iliotibial band. The hamstring muscles, namely, the biceps femoris, the semitendinosus, and the semimembranosus, all originate from the ischial tuberosity. They cross both the hip and knee joints, and insert on the tibia and fibular head (Fig. 19). 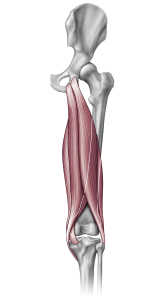 Figure 19
The hamstring muscles: the semimembranosus and semitendinosus on the medial side and the biceps femoris on the lateral side. Note that the biceps inserts on the fibula and the semitendino- sus courses medially to insert on the anterior tibia. 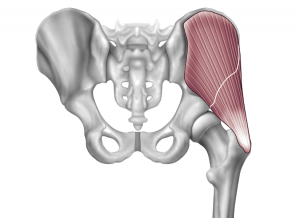 Figure 20
The hip abductors (in this view, the gluteus medius obscures the gluteus minimus underneath it). One essential function of the abductors (which can be inferred from this drawing showing only one femur) is to hold the pelvis level when the contralateral foot is off the ground.

Hip abduction refers to the motion of pulling the leg away from the plane of the body; but in day-to-day life, the more important function of the hip abductors is to iso- metrically resist adduction. That is, these muscles keep the pelvis horizontal when the contralateral leg is not touching the ground. The gluteus medius and minimus arise from the ilium and insert onto the greater trochanter; both are supplied by the superior gluteal nerve, The hip adductors originate from the pel- vis and insert on the femoral shaft (Fig. 21). 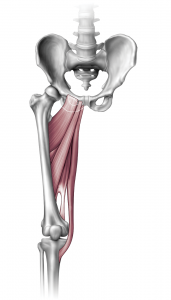 Figure 21
The hip adductors. The adductor magnus is the most powerful of these. Note the hiatus above the medial femoral condyle. The femoral artery passes through here on its course to the popliteal fossa.

They are powered by the obturator nerve. This group includes the adductor longus, the adductor brevis, the adductor magnus, and the gracilis. The gracilis, unlike the other muscles in this group, inserts on the anteromedial tibia near the sartorius and semitendinosus.

The major nerves of the hip region all come from the lumbosacral plexus. The femoral nerve is composed of branches from L2, L3, and L4. The sciatic nerve has both a tibial branch and a peroneal branch (Fig. 22).

These travel through the hip region together but split at the popliteal fossa into distinct nerves.

The superior and inferior gluteal nerves are also branches from the posterior division of the sacral plexus.

Blood vessels enter the pelvis as branches of the aorta. The aorta branches into left and right common iliac arteries at a point located approximately at the level of the L4 vertebral body. These in turn divide into the internal and external iliac arteries at the level of the sacrum. The internal iliac provides branches to supply both the superior and inferior gluteal arteries. The external iliac crosses under the inguinal ligament and is renamed the femoral artery (Fig. 23). 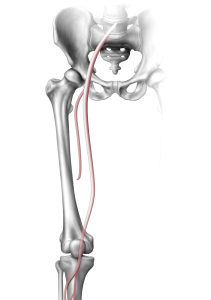 Figure 23
The blood supply to the lower extremity comes from the external iliac artery. The femoral artery moves to the posterior side through the adductor hiatus and is renamed the popliteal artery.

Knee and Leg
Scroll to top