The shoulder comprises three bones (the clavicle, scapula, and humerus) and three joints (the glenohumeral, the acromioclavicular [AC], and the scapu- lothoracic) (Fig. 1). 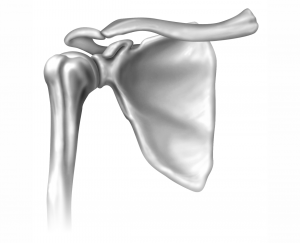 The glenohumeral joint is the primary articulation of the shoulder, the point where the head of the humerus meets the glenoid. The AC and scapulothoracic joints attach the trunk to the scapula, with the arm appended to it.

The clavicle (collarbone) is an S-shaped bone that serves primarily as a strut to which muscle is attached. It is directly under the skin and is thus prone to fracture. The scap- ula (shoulder blade) is a thin, flat bone with several named prominences, one of which, the coracoid process, projects anteriorly off of the scapula, anterior and medial to the glenohumeral joint. Just medial to the cora- coid lies the brachial plexus and the subcla- vian artery and vein. The spine of the scap- ula, another important prominence, runs along the posterior surface of the bone. The spine terminates in the acromion process. The acromion lies approximately 1 cm above the humeral head, creating a space for the rotator cuff tendons. Laterally, the scapula widens to form the glenoid fossa (shoulder socket). The glenoid fossa is smaller than the humeral head, such that only about one third of the humeral head contacts the glenoid fossa. This joint accordingly lacks the static stability of the hip; however, the decreased stability permits far more motion.

The proximal portion of the humerus is the humeral head. It has an articular surface covered with hyaline cartilage and two tu- berosities that serve as the attachment site of the rotator cuff. The greater tuberosity is on the superior lateral aspect of the humeral head and serves as the attachment site of three of the four rotator cuff tendons: the supraspinatus, the infraspinatus, and the teres minor. The lesser tuberosity is medial to the greater; the remaining rotator cuff ten- don, the subscapularis, attaches to it. Be- tween the tuberosities lies the bicipital groove, housing the long head of the biceps tendon as it makes its way from its scapular origin down the front of the arm.

The AC joint is the only articulation between the clavicle and the scapula. The arm and scapula are suspended from the clavicle and held in place by strong coracoclavicular ligaments, which prevent inferior displacement of the arm. When the AC joint is dislocated (shoulder separation), it appears that the clavicle has moved superiorly, but actually the arm sags inferiorly. The scapulothoracic joint is not a true (cartilage-lined) joint but simply the muscular attachment of the scapula to the thorax. Approximately 60° of elevation of the arm takes place at this “joint.” There are more than a dozen muscles that attach to and move the scapula, each of which contributes to the scapula’s normal motion.

The glenohumeral joint is a variant of a ball-and-socket articulation. In fact, it is closer in shape to a golf ball sitting on a tee. This configuration allows for the remarkable range of motion of the shoulder but provides little inherent stability. The glenoid surface is deepened by the glenoid labrum, a fibrocartilage ring that surrounds the glenoid articular cartilage. At the top of the labrum, the long head of the biceps tendon attaches. Stability of the glenohumeral joint is provided by both static and dynamic means. Structures that provide static stability include the labrum, the capsule that runs from the glenoid to the humerus, and the thickened areas of the capsule known as the glenohumeral ligaments. The rotator cuff muscles and the biceps provide dynamic stability.

The glenohumeral ligaments, which are thickened portions of the capsule, limit ex- cessive translation and rotation of the hu- meral head on the glenoid during motion of the arm (Fig. 2). 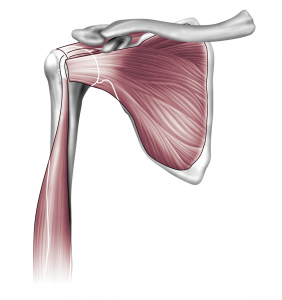 Figure 2
The ligaments of the shoulder: the capsule (and confluent glenohumeral ligaments) and the acromioclavicular, coracoclavicular, and coracoacro- mial ligaments.

The largest and most important glenohumeral ligament is the inferior glenohumeral ligament complex. This complex is shaped like a hammock in which the inferior humeral head rests. It attaches to the glenoid labrum around the lower half of the “clock face.” This structure is the primary stabilizer of the shoulder when the arm is abducted. It prevents excessive anterior, posterior, and inferior translation.

The acromion is held in correct relation to the clavicle primarily by the coracocla- vicular ligaments. The coracoid and the acromion are both connected to the scapula; thus, when the coracoid is held a fixed distance from the clavicle, the acromion will also be held in place. There are two coraco- clavicular ligaments: the conoid and the trapezoid. There is also an acromioclavicular lig- ament, but this is a minor stabilizer. The coracoacromial ligament attaches the coracoid to the acromion. This clearly does not stabilize those two bones—as noted, they are both processes of the scapula. Rather, this ligament most likely serves to help contain the humeral head.

Muscles of the shoulder can be divided into three groups: those that control scapulotho- racic joint motion, those that produce mo- tion at the glenohumeral joint, and those that cross more than one joint.

The trapezius muscle is the largest and most superficial of the muscles of the scapu- lothoracic joint. The primary function of the trapezius is to retract the scapula. The rhom- boid muscles also function as scapular retrac- tors. The serratus anterior protracts the scap- ula and is very important in stabilizing the scapula during forward elevation of the arm.

The deltoid muscle powers glenohumeral abduction and flexion and extension. It is divided into three parts: anterior, which originates from the clavicle; middle, which arises from the lateral acromion; and posterior, which attaches to the spine of the scapula. Intuitively, you can see that the anterior deltoid is a forward flexor of the arm, the middle deltoid is an abductor, and the posterior deltoid powers extension. Paralysis of the deltoid caused by an axillary nerve injury is a devas- tating injury. In many cases, function of the glenohumeral joint is nearly completely lost.

The rotator cuff is made up of four sepa- rate muscles that blend at their insertions and form a cuff that envelopes the humeral head (Figs. 3 and 4).

Figure 3
Anterior view of the rotator cuff, showing the subscapularis and su- praspinatus. The long head of the biceps is also shown. 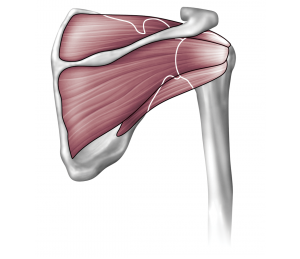 While these muscles provide some power for motion, their primary pur- pose is to stabilize the humeral head against the glenoid fossa. The supraspinatus muscle lies above the scapular spine and attaches along with the infraspinatus muscle on the greater tuberosity. The supraspinatus is active in any motion involving elevation of the hu- merus, working to stabilize the glenohumeral joint. The infraspinatus also stabilizes the hu- meral head; in addition, it accounts for up to 60% of external rotation strength at the shoul- der, the remainder of which is provided by the teres minor below it. The subscapularis mus- cle is the only muscle attaching to the lesser tuberosity and as such serves as an internal rotator. It also helps stabilize the gleno- humeral joint and prevents anterior sublux- ation of the shoulder.

The pectoralis major muscle, inserting on the lateral edge of the bicipital groove of the proximal humerus, serves as a powerful adductor and internal rotator of the glenohumeral joint. The latissimus dorsi muscle also provides adduction and internal rotation. The biceps brachii crosses both the shoulder and elbow joints, but its primary action is supination and flexion at the elbow (Fig. 5).

Figure 5
The biceps originates from the coracoid and above the glenoid and inserts across the elbow. It there- fore flexes the elbow, supinates the forearm, and flexes the shoulder.

The triceps brachii inserts on the olecranon process of the ulna at the posterior elbow, and its predominant function is ex- tension of the arm and forearm (Fig. 6).

Figure 6
The triceps lies on the posterior aspect of the arm and inserts on the ulna. Its main function is to extend the elbow.

All of the important nerves to the shoulder girdle are branches of the brachial plexus, with one exception: cranial nerve XI, also known as the spinal accessory nerve, which supplies the trapezius muscle. Paralysis of the trapezius results in protraction and downward rotation of the scapula, with sig- nificant destabilization of the scapulotho- racic joint. The brachial plexus is formed from the nerve roots of C5-T1 and termi- nates in five main branches (Fig. 7).

Figure 7
The brachial plexus. Note that this is a highly sim- plified view to show basic anatomic relationships. A precise wiring diagram can be found in many anatomy textbooks.

Two of the major terminal branches of the plexus, the median nerve and the ulnar nerve, supply muscles distal to the elbow. Another, the radial nerve, supplies both muscles of the shoulder and those originating below the elbow. The other two, the axillary nerve and the musculocutaneous nerve, sup- ply muscles housed in the shoulder and arm. The axillary nerve branches from the brachial plexus and runs inferior to the glenohumeral capsule as it passes toward the back of the shoulder. The axillary nerve supplies the teres minor and the deltoid muscles. Given its proximity to the shoulder joint, this is the nerve most at risk for injury in fractures and dislocations. The musculocutaneous nerve also courses close to the shoulder and is at risk for iatrogenic injury during surgery. This nerve supplies the biceps muscle. The radial nerve innervates the triceps, a muscle that extends the humerus at the glenohumeral joint, but the main targets of this nerve are in the fore- arm. Although the radial nerve does not have much function in the upper arm, it is prone to injury there because it spirals around the humerus to emerge on the lateral side of the arm. As such, it may be stretched or torn with a humeral shaft fracture.

The suprascapular nerve innervates two muscles of the rotator cuff, the supraspinatus and infraspinatus. This nerve may be- come trapped as it enters the supraspinatus or as it courses around the spine of the scapula to reach the infraspinatus. This compression may result in a motor palsy that can mimic a rotator cuff tear. The long thoracic nerve innervates the serratus anterior muscle, which can be prone to stretch injury. This can cause winging of the scapula with elevation of the arm and is generally accompanied by significant pain and functional deficit.

The subclavian artery becomes the axillary artery at the outer border of the first rib. Six branches extend from the axillary artery, all of which provide rich collateral circulation to much of the shoulder. Unfortunately, the humeral head does not have extensive collateral circulation because it receives its blood supply predominantly from one vessel, the anterior humeral circumflex. If this supply is disrupted, as may happen with a displaced proximal humerus fracture, there is a high risk of development of osteonecrosis of the humeral head. The axillary artery is renamed the brachial artery as it runs behind the teres major. The brachial artery branches into the profunda brachii and then continues to the elbow (Fig. 8). 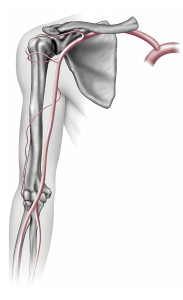 Figure 8
The arterial blood supply of the upper extremity.

Elbow and Forearm
Scroll to top